We get up every morning, glance in the mirror, then get dressed and go about our day. It is startling, however, to one day wake up, glance in the mirror, and realize that once-taut skin has begun to sag, creating crags and wrinkles that had previously gone unnoticed. Unfortunately, once this sagging has been noticed, it is difficult to ignore. Fortunately, numerous companies have developed serums and creams designed to reverse this hapless effect of gravity, bringing youth back to aging, drooping skin. Some of the best neck firming cream and general skin tightening creams have been identified below.

What causes skin sagging? Age is the greatest culprit, though drastic weight loss can also play a role. The most common areas to begin sagging are around the eyes and jowls, creating “sad” eyes and bulldog cheeks as the years go by. In the beginning, however, sagging typically creates a tired or sick appearance, leading many to wonder where their youth and vitality have gone.

On a biological level, sagging skin is caused by a loss of collagen and a depletion of healthy fat. As humans age, collagen production slows, making the epidermis appear looser and less full, while healthy fats begin to thin, resulting in drooping, papery skin. There are many different ways to treat collagen loss, ranging from invasive plastic surgery to the application of serums intended to encourage the body to resume higher levels of collagen production. While most more intensive treatments are also more invasive, creams can be used without serious risk and from the comfort of your own home, making them ideal for all backgrounds and situations. 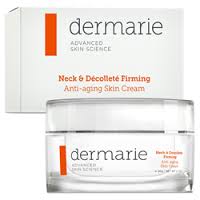 Dermarie’s contribution to the firming cream scene is specifically engineered for the neck and chest, rather than the face. The cream is intended to firm loose neck surfaces and the often thin, wrinkled skin of the chest. Dermarie’s serum aims to improve the appearance of one’s profile, as it lifts and tightens skin of the neck and below the chin, creating more defined features. Although it functions best as a preventative agent, it is also used to improve damage already done. Unlike the product mentioned above, Dermarie should be used both morning and night—though it, too, is best applied on clean, dry skin. The price is similar to Cellex-C; users can expect to spend around $65 for 1 ½ ounces.

Majority of users were men and women whose skin had already begun to sag somewhat. Almost unanimously, it was agreed that this cream was an effective means of tightening loose, sagging skin. While some found the cream to function only for this purpose, others felt the cream was both a tightening agent and an excellent moisturizer, removing the need for an additional source of moisture. Most saw visible results in as little as one week.

Few users reported any negative effects of Dermarie’s product. The greatest source of negativity came from some individuals’ wait time in seeing results—even then, however, results did eventually arrive. 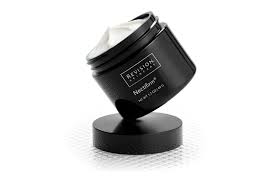 Revision Nectifirm – Is This The Top Neck Firming Cream?

Like Dermarie’s cream, Revision’s Nectifirm is intended specifically for the neck and chest. Peptides set this product apart from its contemporaries, and reportedly smooth, firms, and brightens aged, wrinkled skin. The least expensive of the bunch, Revision comes in at only $48 for 1 ½ ounces. The cream boasts the ability to not only tighten skin, but to fill in fine lines and wrinkles. It is also typically used as a moisturizer, because it is both lightweight and creamy.

By and large, users were pleased with Revision’s product. Some were referred by a dermatologist, while others simply discovered the product online. Regardless of how they stumbled upon this serum, users reported extreme satisfaction with the degree to which the serum was able to tighten skin and create a more youthful complexion. Many customers found the cream so effective, friends and relatives mistakenly thought they’d had more invasive procedures done. Although many men and women expressed shock at its effectiveness, most agreed that all company claims were correct. Some even go as far as to regard the product as the best neck firming cream in the market.

While the positive reviews were certainly emphatic, some users were not pleased with the product Revision had to offer; these users typically did not see a drastic difference (or any difference at all) after consistent use through 2-4 weeks. 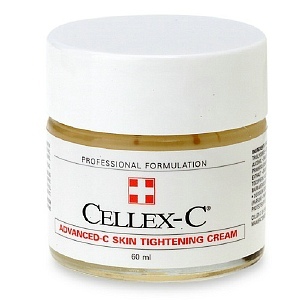 Cellex-C serum is a skin firming cream intended for use on the face, neck, and chest. In addition to natural oils and extracts, the cream contains ascorbic acid and a patented cellex-c compound—the combination intended to firm and tone an already-sagging face. The serum should be used once per day, applied to clean, dry skin. It also functions as a moisturizer, making it an all-in-one night or morning product. Although it is on the more expensive side ($40 per ounce), customers typically report extreme satisfaction.

Most Cellex-C users are extremely satisfied with this product. This is particularly notable, as most users exceed the age of 50, and did not begin using the product until they had reached an older age and discovered corresponding skin troubles. Users report a decrease in wrinkles, fine lines, pore size, and an improvement in both the texture and overall appearance of skin. Most users swear by this product, and continue use for extended periods of time, ranging from 2-15 years.

The most significant complaint regarding this product was the strength of its smell. Some new users found that the potent smell rendered it unusable, as it sat directly beneath the nose. Others did not see a great enough difference after one month of use to continue utilizing the product.

Skinceuticals’ product is comparable in price to the aforementioned items; users can expect to spend $70 on just under 1 ½ ounces. Unlike the previous products, however, Skinceuticals’ product seeks not only to tighten skin, but also to improve damage perpetrated by years of sun and element exposure. The primary ingredient targeted toward improving skin appearance and elasticity is centella asiatica, a simple botanical extract. Cream may be used either once or twice, depending upon user preference, and should be applied to the face, neck, and chest.

Most users identified this product as an excellent moisturizer, capable of smoothing weathered skin and improving overall complexion. It was praised by men and women both; women were impressed by the cream’s compatibility with makeup, while men emphasized its ability to repair element-exposed areas. Individuals with sensitive skin also had positive experiences, marking this serum as one for people of all ages and constitutions.

Negative reviews were often vague, arguing that this item was inferior to other skinceutical products without identifying a specific reason for this assertion. Another customer suffered from cystic acne after use. Finally, some users were pleased with the product, but decided against consistent purchasing due to the price.

Although it boasts a higher price point than its alternatives, Cellex-C is a superior product, offering users:

A quick glance of user recommendations and reviews reveals the superiority of this particular bran, as most unequivocally agreed that this product is a must-have, regardless of age.