A quick glance through any gossip magazine reveals the prevalence of invasive surgical procedures to procure the fountain of youth. Commercials, billboards, and print advertisements all offer procedures designed to tighten face, restore vitality, and create a more youthful you. However, many of these treatments are quite invasive, and pose a potential hazard to one’s body. To prevent the over-use of invasive surgical corrections, Ultherapy was developed—a non-invasive therapeutic technique created to ease the burden of aging and imbue skin with youth and vitality.

Ultherapy is a therapy technique using ultrasound technology to lift and reshape the face. A non-invasive procedure, ultherapy requires no downtime, and utilizes FDA-approved equipment and techniques. Like most therapy promising anti-aging effects, this particular treatment is used to boost collagen production in the body, resulting in a more youthful appearance, including fuller, firmer cheeks, chin, forehead, and décolletage. 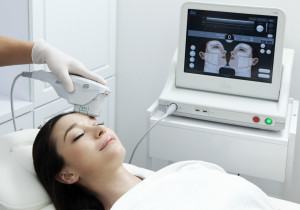 When you first express an interest in Ultherapy treatment, you will meet with a licensed practitioner to discuss concerns and options. After determining the best treatment option for you, the provider will then schedule a treatment. Nothing is required in advance of the treatment, such as creams, fillers, or pre-treatment appointments.

At the appointment itself, you will be required to lie in a chair, eyes closed. The area to be treated will be cleaned, and an ultrasound gel will be applied. From there, the wand will be applied, and the treatment will have begun. A typical facial treatment lasts from 60-90 minutes, while a chest treatment is typically 30 minutes long. Although intensity levels vary from person to person, all potential customers should expect a warming sensation, and some may feel a mild stinging, or churning. Each of these is to be expected, as is produced as a result of the collagen production being stimulated. The sensation only lasts for the duration of the treatment, however, and will not persist after your appointment has concluded.

Following treatment, users should expect a small difference in the appearance and feeling of skin, including redness, some tenderness, and even mild swelling. Each of these effects dissipates within hours, and those undergoing treatment need not worry about adhering to an after-treatment plan, or avoiding normal activities; normal activity may be resumed immediately following a session. 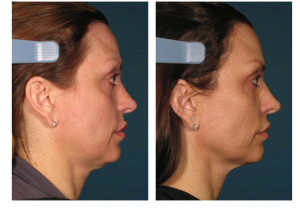 What Do Real Customers Say?

Most customers are pleased with the results of Ultherapy treatment. Although it is not considered a miracle worker, turning the clock back from 80 to 40, most customers see at least a 5-year difference in appearance, with many seeing a change described as “going back” 10-15 years. A relatively inexpensive procedure that is certainly far less than invasive surgery, Ultherapy sessions should be undertaken every 1.5-2 years to ensure that collagen production remains steady.

Most customers are men and women ranging from their thirties to their sixties. Obviously, the older the patient is, the older the patient will look after the procedure. However, many users in their sixties were pleased with results, as many found that their jowls and sagging necks were significantly remedied for at least one year, with many seeing results for as long as two years—though collagen production does, as expected, lessen as time goes on.

Although the majority of customers are pleased with their results, others are not so sure, as the procedure can be pricey, and does not deliver as dramatic a change as more invasive procedures or injectables. Most of these customers went in expecting drastic differences and were displeased to only see moderate tightening and toning.

Still others were disconcerted by the sensation following the procedure. Some described it as a numb feeling beneath the skin—a feeling that, again for some, persisted for several weeks. Although doctors typically consider this sensation a normal aspect of inflammation, the odd feeling was enough to deter some patients from using the procedure again.

Finally, some patients experience bruising that persists for several days to a couple of weeks, making the “negligible downtime” of the procedure an empty promise. For this reason, men and women prone to bruising should likely expect to see some amount of bruising and, consequently, some downtime.

How Do Doctors Feel?

Most doctors consider the procedure a safe alternative to plastic surgery. This is due, in large part, to the long-term use of ultrasound technology in medicine, and the science behind the procedure. That being said, those same doctors will caution potential patients that the therapy can cause more pain than some reviews and practitioners might initially let on: some patients experience painful side effects, including:

Although paralysis and welts are not common side effects, they are not unheard of and can cause pain more extreme than many patients expect. 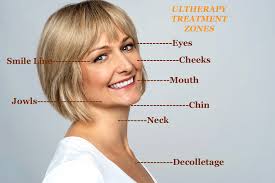 Is this an adequate replacement for a facelift?

Although Ultherapy does not deliver results as dramatic as surgery does, this serves as a middle-of-the-road option, as it is more expensive and risky than simply applying creams, but is not as dangerous and invasive as a surgical procedure.

How long do results last?

Most practitioners will recommend patients come in every 12 months for maintenance. However, many customers find that a “touch up” is needed only once every 1.5 to 2 years.

Unlike many laser-based therapy options, only a single treatment is needed in a 12-month period.

Can anyone undergo this procedure?

Is Ultherapy worth it? Ultimately, that will depend on your age, skin type, and the type of results you are looking for. Ultherapy is certainly not a budget-minded option, as it can cost several thousand dollar, but is better suited to those willing to spend money, but unwilling to engage in any sort of invasive procedure. For men and women seeking a very real lift with minimal pain and invasion, Ultherapy is an excellent candidate.