What Is the Vi Peel?

The Vi Peel is a chemical peel comprised of acids, vitamin C, and phenol. These combined ingredients are used to provoke a chemical reaction with the surface to skin, prompting the topmost layers of skin to begin peeling away to reveal unblemished, more youthful skin. The product is considered a celebrity favorite by many, as it is both less painful and more effective than many of its competitors. 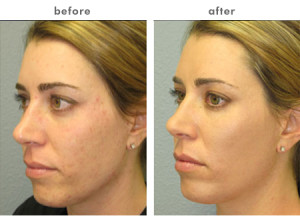 What Sets this Product Apart from Other Chemical Peels?

The Vi Peel is preferable to many competitors, as it contains both harsh chemical ingredients and a local anesthetic, making the peel far less painful than many other treatments of this nature. Because it provokes a chemical reaction in skin, and the epidermis literally begins to peel and strip away, chemical peeling can be quite a painful process—for as much as a week after the procedure has been completed.

The product is also set apart, as it claims to be undetectable on days 1 and 2, and peeling is reportedly able to be hidden (or minimized) by the application of heavy moisturizers such as Aquaphor. This makes it ideal for men and women unable to hide out for 3-7 days after the treatment has been undergone. 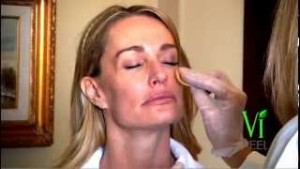 Who can perform this procedure?

Although the peel may be purchased from various vendors and locations, the procedure is best completed by a licensed skincare professional. This is largely due to the potential danger associated with chemical peels; these chemicals can cause irreparable damage if used incorrectly (such as on the eyelids, and other thin-skinned areas). Rather than purchasing a peel kit from an online source or other potentially unreliable location, it is best to take your business to a spa, esthetician’s office, or dermatologist’s office, and have the peel applied by someone who is both familiar and comfortable with the treatment.

If you do choose to complete the peel yourself, follow safety precautions to the letter. Avoid thin-skinned areas, and do not leave the peel on for any longer than is recommended. Take care of skin following the procedure, and avoid sun exposure and excessive sweating as much as possible to both preserve effects, and avoid unnecessary pain.

Is the Treatment Suitable for Everyone?

According to the manufacturer, this treatment is suitable for all skin types and colors. It should be noted, however, that men and women with darker skin tones run a higher risk for pigmentation problems following the treatment; some have found that hyperpigmentation is increased by use of the peel, while others have found permanent discoloration (typically small white spots). These side effects, however, are typically avoided through safe use, and application by a professional.

Are There Any Downsides?

As with any skin treatment, there are potential downsides. The possible negative side effects include, as stated above, permanent pigmentation problems, as well as permanent sun sensitivity. Although these issues are quite rare, they are not unheard of, and potential users should be cognizant of these potential problems.

Short-term downsides are inevitable, including the changes to your skin that will occur over the course of 6-7 days following treatment. These include redness, peeling, skin sensitivity, sun sensitivity, and inflammation. Because of these results, many men and women prefer to have peels applied over vacation days or other days when a peeling face is less conspicuous. If this is not possible, however, users typically find that peeling is at its worst 3-4 days following application.

How Often Must the Treatment Be Used?

Initial treatment often requires more concentrated application, and may be applied every two weeks for the first few months for the greatest results. After the initial treatment, however, follow-up procedures are typically only required every 4-6 months. At $275-$300 per treatment, this comes out to about $50-$75 per month—a price tag that is attractive to even the budget-minded.

Caution should also be exercised to avoid over-use: over-use can prove just as problematic as not enlisting the help of a peel at all, resulting in thin skin, redness, and damage.

What Do Customers Say?

Customers are largely pleased with their Vi Peel experience. Most saw a drastic reduction in the first use, particularly with regard to freckles and other skin discolorations. Many saw drastic changes in acne scarring with consistent use (the more advanced initial treatment, plus twice-yearly maintenance), as well as changes in overall pore size, fine lines, and surface wrinkles. Most were pleasantly surprised by the efficacy of the local anesthetic, and were happy to find that the peel was painful for only a few minutes during application.

Existing customers caution new users to follow all instructions to the letter to prevent sun damage, excessive pain, and embarrassment, and suggest that most users should plan for approximately four days of downtime to avoid being seen with red and inflamed skin. After the initial treatment period, however, customers typically saw more youthful skin, with more even skin tone, smoother texture, and fewer enlarged pores and wrinkles.

Users who were not pleased with the treatment typically expressed frustration regarding the downtime. Although the manufacturer suggests that users are able to go out in as little as two days after treatment, most found that this was not the case, and required at least four days to look somewhat “normal” again. Although many customers were not upset by this, some found the additional time unbearable.

Some users also found the cost prohibitive, and preferred to stick to at-home skincare routines, such as the use of small microdermabrasion machines and exfoliating peels.

Is the Vi Peel a Useful Addition to Your Skincare Routine?

The treatment, based upon user reviews, seems a worthy addition to your most men and women’s skincare routines, as it produces visible results in a matter of weeks. It has even been lauded by some as a miracle worker, of sorts, drastically reducing the appearance of discoloration and other visible signs of aging. The price, though it may initially seem expensive, is less so when some money is set aside each month for treatment, as it costs only $50-$75 per month this way. Overall, the Vi Peel is a powerful, useful anti-aging tool.